The historic home known as “Fairy Knoll” is located on the corner of Whitehill and Robertson Road and is a masterpiece to behold. Built in 1901 for Thomas Hancock Junior and his wife Louisa (nee: Hayne), the house sits atop a large hill that overlooks the city of Ipswich and the surrounding areas of Pine Mountain, Rosewood, Flinders Peak, Bundamba and at one point when the house was still in existence, Lewis Thomas’s famous mansion, “Brynhyfryd”. The history of “Fairy Knoll” and the land on which it is now perched are steeped in heritage, with its history beginning when Thomas Hancock Senior first made his way to Ipswich in 1863 with his young family, which included son Thomas Hancock Junior. With a young family to support ,Thomas Hancock Senior quickly established a timber sawmill at Pine Mountain, and later also established a mill in Rosewood. After several years Thomas Senior realised the importance of timber in a booming new settlement and acquired a lease on a Timber Mill in North Ipswich in 1880 and established the business as Hancock & Sons. After a short period of time the business was booming and at one point they were employing approximately 270 people and also had offices in Brisbane. At this point Thomas Hancock Senior had entered into business with his two sons Josias and Thomas Hancock Junior. However in 1891 after Thomas Senior’s death the business was passed into their hands.

There is much conflicting evidence surrounding the four acres of land on which “Fairy Knoll” now stands, as various reports state the a small timber house was built by Thomas Senior on the land for his family. However, research also states that Thomas Junior purchased this land and built the first timber structure on it in 1885 for his second wife Louisa and their growing family.  In both situations however, it is made clear that the original timber house was named “Fairy Knoll” owing to the fact that there was a large housing estate east of Queens Park which was given the similar name “Faerieknowe” by its eccentric owner. The small timber house was said to sit atop the hill until 1897 when Thomas and Louisa with a family of ten children, decided to rebuild a more spacious home for their large family.

Design for the new two storey “Fairy Knoll” house began in 1897 and was completed by famous architect George Brockwell Gill. Builders Worley & Whitehead were contracted to build this great mansion which upon completion had a façade of banded brick work which was common in Brockwell Gill’s architecture of the time. Thomas Hancock Junior had a grand plan for the house however he passed away before it’s completion in 1901, but his wife still clung to the prospect of completing his dream home a top the hill. When it was finally finished the house included several key features including decorative timber verandas and associated timberwork which ran the perimeter of the house, solid timber doors throughout the home, as well as a grand timber internal staircase, numerous fireplaces and fancy lead light windows in a ten-foot wide entrance hall. The home itself encompassed seven bedrooms, two bathrooms, sewing room, kitchen, dining room, scullery, drawing room and office as well as one of Fairy Knoll’s most outstanding features which was the observatory and lantern feature in the roof. This unusual feature was later used in World War 2 as a spotters tower due to the view it commanded over the city. The “Fairy Knoll” grounds incorporated a grand set of gardens including tennis courts, a fernery, stables, a laundry, coach house and rock garden; however many of these external buildings cease to exist today.

Lousia and her ten children moved into the house on its completion and Mrs. Hancock herself remained in the house until her death in 1947. In 1950 the land was sub-divided and in 1952 the house was sold to Queensland Health, who converted it into the Jefferis Turner Centre which was a maternal and child welfare home. In order for the home to operate in a orderly fashion a fair amount of internal changes were undertaken to accommodate its new requirements. The maternal home ceased operation in 1986 and the house was transformed into a respite centre for intellectually handicapped children, and more alterations were made to the external and internal space of the building. In 1988 the façade of “Fairy Knoll” was a given a revamp and various alternations were made to return it to ist original historical appearance. Since this time the house has been transferred through numerous families until 2011 when it was purchased by Doctor Michael Fish, who has carried out numerous renovations to return it to its former glory. 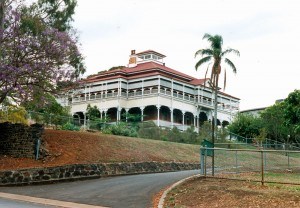