Originally the suburb was named Bundanba, it is believed to have derived from the Aboriginal words ‘bundan’ and ‘ba’, meaning a stone axe and place of.  This referred to Bundamba Creek which was a source of good stone for hand axes. The name was officially changed to Bundamba in 1932.

In 1864 cotton plantations were in full swing, planters hoping to make rapid fortunes by the Government bonus and the high price for cotton during the American Civil War. By the year 1887, coal had been discovered and two mines were opened up. Brickworks, mills and various workshops and stores were operating around the same time and slowly replacing the cotton fields.

For information on other Ipswich suburbs and the meaning of their names, check out the history section of the Ipswich City Council web site: 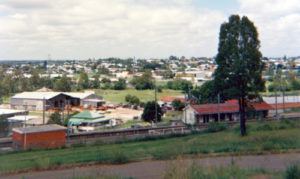