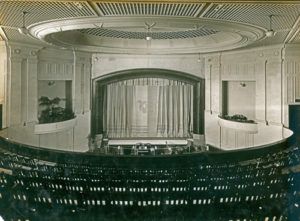 Over the years Ipswich has had many picture theatres including the Olympia Theatre in East Street – renamed the Tivoli in 1927, The Garden Theatre in Silkstone, the Rialto in North Ipswich, the National Hall and the Alpha in Booval, Parkside in Brisbane Street and The Lyric, which had a sliding roof, but the Wintergarden Theatre was impressive.

The Wintergarden was designed by architect H.E. White for Birch, Carroll and Coyle in 1925. The theatre seated 2000 people, had a promenade floor, two theatre boxes, an upper gallery and two palm courts. Within four years of opening the ‘talking pictures’ had arrived and the theatre was updated by sound engineers and electricians with a Vitaphone sound system. Apart from movies the theatre also hosted vaudeville productions, strike meetings, screen tests (in front of audiences), chidren’s shows and performances by the Ipswich Wintergarden Ballet.

It was a glamorous and exciting event to go to the movies and people dressed appropriately for the occasion. Gentlemen in suits and ladies with their best dresses, hats and gloves. The advertising of new movies was an event as well with the cinema going all out to promote the next movie to be shown as can be seen in the photo below.

Promotion of the movie Genevieve – Image courtesy of Picture Ipswich

Information taken from “Ipswich in the 20th Century” by Robyn Buchanan.